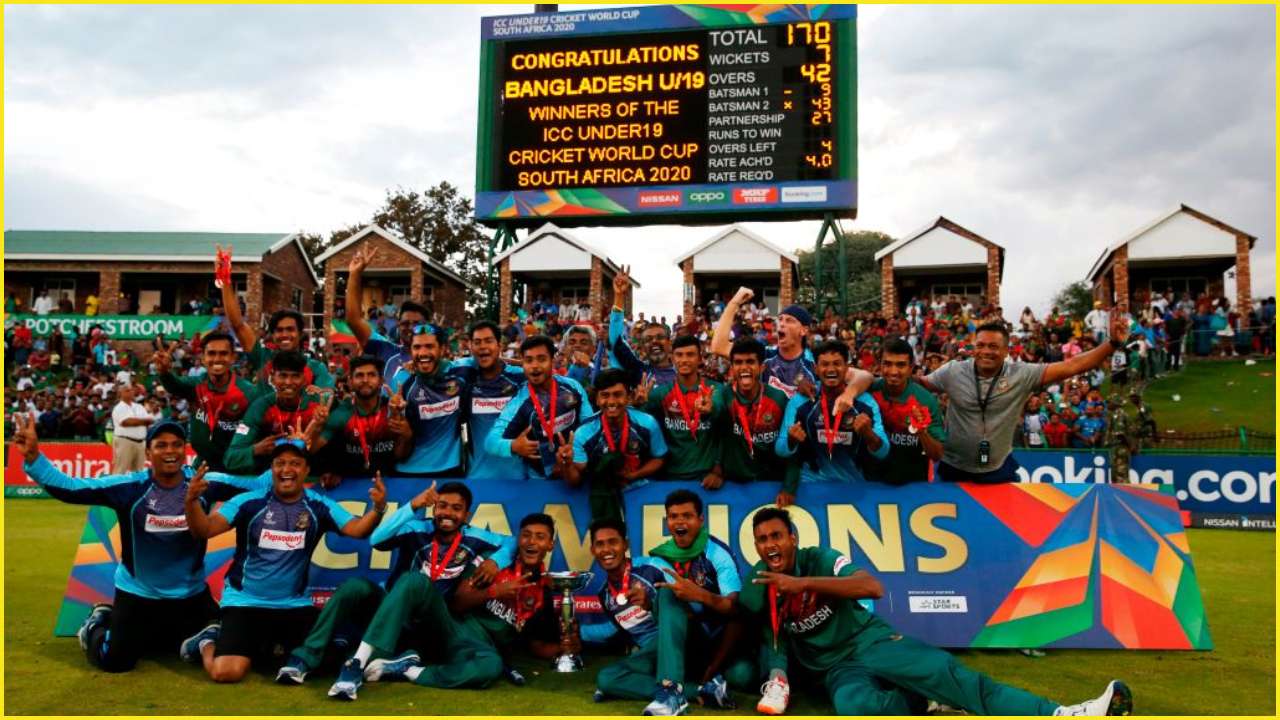 Bangladesh beat India by three wickets (DLS method) in a thrilling U19 World Cup final to lift the title for the first time at Senwes Park in Potchefstroom on Sunday (February 9.).

In chase of a modest total of 178 runs, Bangladeshi openers Parvez Hossain Emon and Tanzid Hasan provided the side with a solid start.

The duo managed to knit together a 50-run stand for the first wicket before leg-spinner Ravi Bishnoi drew the first blood for India by dismissing Tanzid for 17 runs.

Mahmudul Hasan Joy then came in and formed a short 12-run partnership with Emon before Bishnoi sent him back to the dressing room for 8 runs.

Emon was forced off with the cramps as Towhod Hridoy was sent out as his replacement.

However, his stay was cut short by Bishnoi again who dismissed him for a duck and then went on to knock Shahadat Hossain's (1) wicket soon after.

Skipper Akbar Ali then came in to steady the ship for Banglangladesh and managed to formed brief partnerships with Shamim Hossain (7) and Avishek Das (5) who were dismissed by Indian pacer Sushant Mishra.

The Bengal cubs were reduced to 102/6 in 22.6 overs when Emon joined Ali in the middle and managed to form a formidable partnership.

The duo knitted together a 41-run stand for the seventh wicket.

Emon played a 47-run knock off 79 balls before Yashasvi Jaiswal removed him in the 32nd over.

Bangladesh needed 35 runs to win the final when Rakibul Hasan joined Ali in the middle and built a winning partnership.

Ali (43) and Hasan (5) remained unbeaten in the end and guided Bangladesh to their very first ICC trophy.

For India, Bishnoi ended the day with the impressive numbers of 10-3-30-4. He also became the leading wicket-taker in the tournament with 17 dismissals under his belt.

Batting first, India got off to a terrible start as they lost Divyansh Saxena for just two runs early on. Jaiswal and Tilak Varma (38) did steady the ship for India however things went downhill very soon as they kept losing wickets at regular intervals.

The young Bangladeshi bowlers were in top form as their aggressive bowling attack restricted India on 177/10 in 47.2 overs.

Yashasvi Jaiswal was the only stand out performer with the bat on the day for India as he smashed 88 runs off 121 balls and became the leading run-scorer in the tournament too.