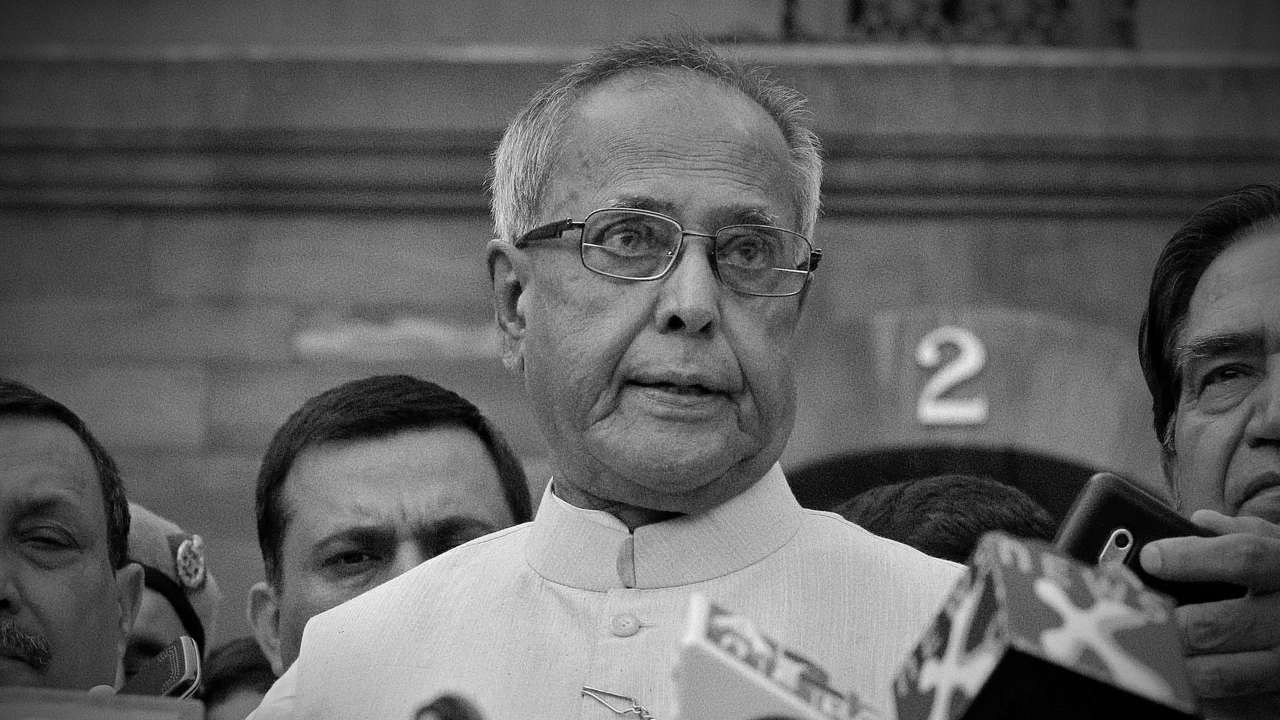 Pranab Mukherjee, the towering statesman who strived for consensus in polity

Former President of India Pranab Mukherjee passed away at the age of 84 on Monday in Delhi's Army's Research and Referral Hospital after his medical condition declined in the morning and he suffered a septic shock due to lung infection. Prime Minister Narendra Modii and several other politicos condoled the demise and vast political career. Prime Minister Modi also mentioned that he was new to Delhi in 2014, when he was first elected as the Prime Minister of India, however, Pranab Mukherjee, the then president, had guided and supported him to made him feel welcome.

He was also awarded India's highest civilian honour, the Bharat Ratna, in 2019 by the President of India, Ram Nath Kovind.

Pranab Mukherjee's long political career is indeed one to behold, for the books.

Born in 1935, in a remote village called Mirati in Birbhum District of the state of West Bengal to freedom fighters, Former President Mukherjee has had a long and illustrious career in Indian politics. Born nearly a decade before India’s independence, Mukherjee was both a witness to and an active participant in some of the most important events leading to the nation’s independence and thereafter, its journey that established it as one of the most vibrant and cited democracies of the world.

Former President Mukherjee’s life is a story of the rise of a man from humble beginnings to the first citizen and President of the country through hard work and commitment.

After post graduating in Political Science and History from the University of Calcutta, he completed his LLB from the same university. After finishing his education, he worked for a short while as a clerk in a government office, which he left to become a lecturer in Political Science in South 24 Parganas, one of the districts of his home state.

The Former President’s career in politics began in 1969 with his election to the Union Upper House – Rajya Sabha or the House of the Elders. Within a decade, he was elected deputy leader of the House to which he was re-elected four times. In 1980, he became the leader of the house.

The Former President’s scholastic disposition, oratorical skills, his remarkable gift to recall to memory even the lesser-known facts of the nation’s political and Parliamentary history, and his genial personality, won him admirers, respect, and stature, cutting across party affiliations, in the Parliament. He gained recognition of being one of India’s foremost Parliamentarians.

It made him the natural choice of his party to be its famed trouble-shooter. He was called upon, in this capacity, to steer some of the most important, delicate, and sensitive debates in the Parliament, both on behalf of his party and the Government. He accomplished this task with great finesse which earned him the reputation as a consensus builder, in the tumultuous political landscape of the country.

In the Congress party, Former President Mukherjee rose rapidly, becoming one of its towering leaders. He was made a member of the Congress Working Committee, the highest policy-making body of the party at an early age, and continued in it for 23 years until he was elected as the President of the country.

In 1969, he was inducted as a member of the Council of Ministers in every Government that the Congress party formed or led. During more than four decades since then, he was either a junior Minister or a Cabinet Minister of the crucial Ministries of Commerce, Finance, External Affairs, and Defence. He was also the Deputy Chairman of India’s Planning Commission.

Some of his landmark achievements as a Cabinet Minister include his selection as the Best Finance Minister of the world in 1984 by Euromoney Magazine; Finance Minister of the Year award in 2010 by Emerging Markets, the daily newspaper of Record of IMF, World Bank, etc.; and as the Defence Minister, opening the gates for stronger India-US defence cooperation by concluding the ‘New Framework for US-India Defence Relations’ in 1995. In this capacity, he also laid down the much-needed blueprint for the modernization of India’s Armed forces and established procedures and systems to overcome crippling delays that had eroded the nation’s defence capability. As the External Affairs Minister, he built the foundation for wider relations with the US, steering and signing the India-US Nuclear Agreement in 2010.

The Former President also served as the Chairman of around 95 Groups of Ministers (GoMs), during the two UPA Governments (2004-10), formed by an alliance of over a dozen disparate parties. His astute consensus-building capability, his experience, and seniority, was utilized by the government to resolve a delicate and sensitive difference between Ministries that threatened to hamper the performance of the Government. In this manner, he played a crucial part and left a deep imprint on almost all the major policy decisions taken during the 10 years of the UPA Government.

Even as the President of India, a post of more ceremonial significance in a Parliamentary Democracy, he strove to be a catalyst on issues of critical importance to the country. During his five years in the Rashtrapati Bhavan, the largest office-cum-residence of any head of state in the world with its sprawling lawns and gardens, the Former President transformed his Presidency into what is now famously known as the ‘People’s Presidency’. He threw open the vast estate to the people and encouraged their participation in several activities taken during the Presidency. It brought throngs of people to the estate and by the end of his Presidency over five million people visited Rashtrapati Bhavan and its precincts, the majority taking advantage of the liberalized access to visit the world-famous Mughal Gardens situated across the President’s Study.

As the President, he reached out to millions in the country and abroad by starting a twitter account and an interactive Facebook platform to encourage their participation and involvement in several new innovative programs of Rashtrapati Bhavan. They included workshops to sensitize people and promote schemes for environmental protection, gender equality, innovation, and skill development, for which various In-Residence programs were launched. Through this program, artists/innovators/scholars/teachers/students were able to reside in Rashtrapati Bhavan as a guest of the President for up to a month. Here they interacted with important people, worked in the areas of their expertise in the quiet of the precincts, and returned as change agents of the society.

Another area of focused attention was innovation and its importance for the development of, especially semi-urban and rural areas. To give innovations a platform for exhibition, celebrate and promote scientific temperament and technological innovation at the grass-root level and disseminate information on them at a pan-Indian level, the Festival of Innovation was started at Rashtrapati Bhavan and held at regular intervals.

Prominent among the new initiatives were the efforts taken to promote higher education in the country. Towards this goal, the Visitor’s Conferences of Vice-Chancellors/Directors/Director Generals of Institutions of Higher Learning were held to formulate strategies, many of which are under implementation.

Taking the Presidency to the people, 13-volume documentation of the history and the various aspects of Rashtrapati Bhavan was published besides providing online access to the library containing rare publications.

One of the major efforts was to create facilities for the people to better appreciate the important events in the nation, many of which the Rashtrapati Bhavan was a witness to. Two museums were built covering a space of over 11,000 square meters to house documents, artifacts, and erect story-telling events relating to India’s freedom struggle.

Over 60 cultural programs were also staged in Rashtrapati Bhavan to encourage and promote the kaleidoscopic cultural facets of the country. Several initiatives were taken to promote the happiness and wellness of the 7000 odd inhabitants of Rashtrapati Bhavan. The 4S initiative consisted of programs for different age groups- ‘Samagam,’ for senior citizens ‘Sparsh,’ for differently-abled children, ‘Sanskar’ for nutritional requirements of children, and ‘Sanskriti’ for the holistic development of children aged 7-15.

A pilot project of SmartTownships was initiated in the President’s Estate. It has now transformed into the SmarTgram Initiative to develop 100 villages of Haryana into Humane, Happy and Hi-tech villages in collaboration with the State Government, NGOs, public and private individuals. This work is now being taken forward through the Pranab Mukherjee Foundation. The Former President is a recipient of several awards and honors including India’s second-highest civilian award, the Padma Vibhushan in 2008, and the Best Parliamentarian Award in 1997.

What perhaps the Former President will be most remembered in history for his scholastic temperament, his unwavering commitment to development through inclusive growth, his unflinching adherence to pluralism, rule of law, and constitutionalism. To him, the last three are the keystones of democracy that have sustained India especially during the trying decades in the immediate aftermath of the nation’s Independence. These pillars he has safeguarded zealously, without fear or favor, even during challenging times and in the face of adversarial circumstances that future historical research may testify.

The constitutionalist in him has chiseled policies for stability in an often chaotic political arena. He held key portfolios of foreign, defence and finance, where at times he was regarded as the ‘Chanakya’, taking India towards the top in the global locus of affairs. Many landmark events in the political and economic process of India have imprints of Shri Mukherjee’s critical thinking and intellect. His objectivity and dedication towards the ultimate ethos of constitutional values have gained him, admirers, across party affiliations. His scholarship and impassioned oration bring alive events, both recorded and unrecorded for those who get the privilege of listening to him. His love for a student-centric communication is finding expression through an interactive format ‘Pranab Sir ki Pathshala’.

His belief in pluralism, subscription to inclusiveness, and commitment to the people of this country gratuitous and giving to the nation. His tenure as President has transformed the Rashtrapati Estate into a Smart Township giving a draft model for others to replicate.

The conferring of the Bharat Ratna in 2019 embodied his various accolades, awards, and ‘Doctor of Laws (Honoris Causa)’ by various national and international institutions.

The Former President was married to late Smt. Suvra Mukherjee, an accomplished singer of Rabindra Sangeet and an artist. He is survived by his two sons and a daughter. A man of simple taste, Former President Mukherjee, enjoyed reading, gardening and music in his spare time.