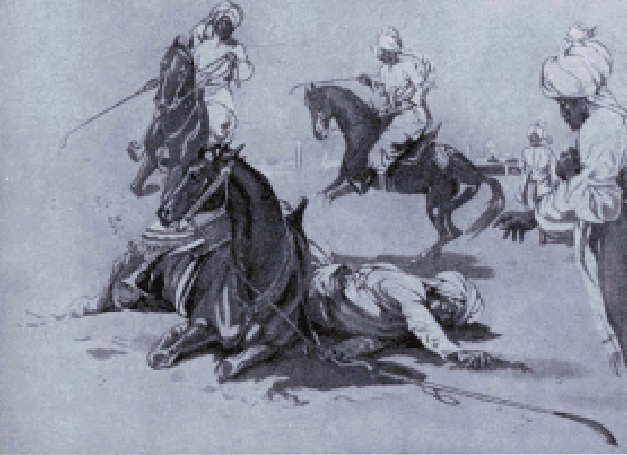 The Story of a Stallion

The first ruler of the Slave Dynasty in Delhi Sultanate, Qutubuddin Aibak, died due to falling off a running horse.

But is it really possible that an army general who first rode a horse at the age of 11 and fought countless battles riding horses, could die from falling off a running horse?

When Qutubuddin Aibak looted Rajputana, he killed the King of Mewar and captured prince Karan Singh. Along with the looted wealth and the prince, he also took the prince's horse Shubhrak to Lahore.

In Lahore, Karan Singh tried to escape and got caught in the process. Qutubuddin gave an order to behead him, and to increase the disgrace, to play a polo match, using the dead prince's head as a ball.

On the day of the beheading, Qutubuddin arrived at the venue riding Shubhrak. The horse, on seeing his master Karan Singh, started prancing uncontrollably, resulting in Qutubuddin falling off the horse and Shubhrak fiercely kicking the fallen Qutubuddin. The powerful blows on the chest and head with the deadly hooves proved fatal. Qutubuddin Aibak died on the spot.

Everybody was stunned. Shubhrak ran towards Karan Singh and taking advantage of the chaos that followed, the prince jumped and mounted his gallant horse, who immediately took off, starting to run the most difficult race of his life.

It was almost a continuous run for a good 3 days, finally stopping at the gates of the kingdom of Mewar. When the prince dismounted from the saddle, Shubhrak stood still like a statue. Karan Singh lovingly rubbed his hands on the horse's head, but he was shocked when Shubhrak fell to the ground dead.

The mighty horse was successful in saving his master and escorting him safely to his kingdom before dying. We have read about Chetak, but Shubhrak's story is beyond faithfulness! Facts like these never become a part of syllabus in our modern education system. Most of us haven't even heard this name. Have we?

This is buried in History. We have been eulogizing animal sacrifice stories of other countries like that of Hachiko. Now is the time to share our glory and bring it to light.