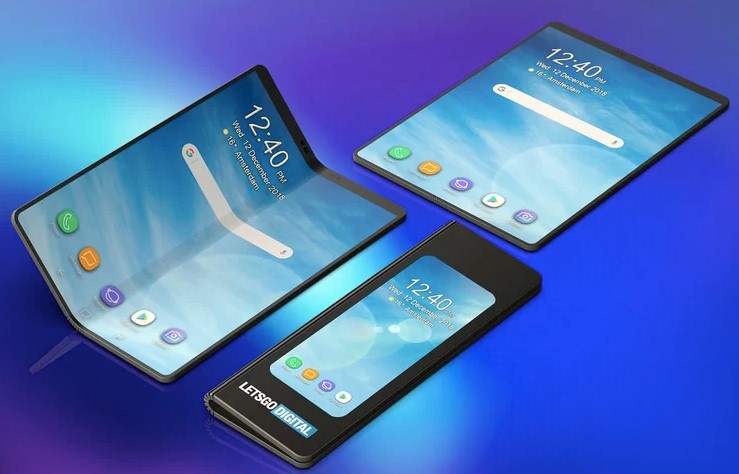 The Phones of Tomorrow

We have been promised foldable phones for the last couple of years and the much-hyped foldable display smartphones are here finally. Samsung & Huawei are competing in the initial race and unveiled the foldable phones at MWC 2019 trade show in Barcelona. It's radical, it's crazy, it's a game changer, it's going to change the phones of tomorrow - these are some of the initial reactions at MWC 2019 after looking at the biggest form-factor changes that have hit smartphones since inception.
Samsung Galaxy Fold
The Galaxy Fold is a foldable smartphone which brings a tablet and a phone together with two screens - a smaller screen on the front which looks like an old fashioned smartphone and another bigger screen on the inside that's folded in half. Although the smaller screen on the front looks odd with a 4.6-inch display without occupying the entire screen, the inside screen opens to a bigger 7.3-inch display. The small area in the top right corner is reserved for cameras. The outside small screen serves as a regular smartphone and can be used with one hand, but by design, when opened, the bigger screen serves as a tablet and it requires two hands to use.

From the outside, it is a bit bulky and looks like 2 phones (one phone on top of another phone) which somehow resembles early 2000s smartphone phone with a hideaway keyboard. You can open an app on the outside screen and continue using it on the big screen inside.

To allow selfies from outside the screen or inside the screen, it has to equip six cameras. On the back, three cameras as the Galaxy S10 and on the front a single 10-megapixel camera and inside are two additional cameras - a selfie camera and an 8-megapixel depth camera.

The Galaxy Fold will cost $1,980 for 512GB of storage and 12GB of RAM and it will come in Cosmo Black, Space Silver, Astro Blue, and Martian Green. It is on display and available to buy in the US in select AT&T, T-Mobile, Best Buy and Samsung Experience Stores from April 26th.

Huawei Mate X
Just like Galaxy Fold, Huawei Mate X is a foldable smartphone which brings tablet and phone together with two screens, but it's slightly different from Galaxy Fold. Instead of a front screen, Mate X comes with an 8-inch OLED display that folds on the outside (as opposed to inside) so that you can have the screen on both sides when closed. When it is closed, the screen works as a dual-display and you can use it as a regular smartphone. Galaxy Fold has a single display when closed, but Mae X folds outside and splits the 8-inch display into two screens when closed.

When closed, it takes up the entire front of the phone with the 6.6-inch display, and the rear part of the display turns on only when the phone is flipped around with the 6.38-inch display leaving some space for cameras. When closed and in phone mode, Huawei did an excellent job to cover the screen wrapped around the side with a digital bezel. Digital bezel appears along the folded edge of the device to give the appearance of a normal phone with the physical bezel.

Huawei dedicated the entire inside screen for display by moving the cameras in a side bezel behind the bigger screen (next to the rear screen when folded). This is much better than the huge notch on Samsung’s Galaxy Fold but this brings a disadvantage if you are planning to use for selfies or video calling in tablet mode. These are restricted to rear display in phone mode.

Huawei Mate X costs 2,299 euros (approximately $2,110) for 512GB storage and 8GB RAM when it arrives around this summer.
Others
While South Korea and China are battling the war with inside and outside mechanisms, the pioneers and startups in the US are getting ready for the battle.

Chinese phone maker Xiaomi introduced its new foldable phone in January. Xiaomi's phone folds down into thirds with both sides folding down as opposed to other phones which bends down in the middle.

Instead of combining a phone and a tablet, Nubia, an associate company of Chinese phone maker ZTE is combining a phone with a smartwatch. Introduced at MWC  2019, Nubia Alpha is a unique phone that wraps around a user's wrist, similar to a smart-watch.

And then there’s Apple, the maker of the iPhone and the world’s most popular phone, updated its patent application in February for a phone with a foldable display. Bank of America Merrill Lynch analyst Wamsi Mohan believes Apple is working on a folding phone for 2020.

Finally, Google, which is supporting foldable phones with its Android OS platform, filed a patent application for a foldable device in December 2018.

The future
Despite inside wins or outside wins, the foldable display will change the fate of the future phone as it is radically changing the form factor and soon this technology will enter into other areas beyond the smartphones. When folded, the size is a bit bulky and I am sure that the future iterations of the foldable phones will address the size issue. Right now, these phones are expensive and out of reach for mass adoption. Once the price starts to go down, we will see many people holding foldable phones which are the phones of tomorrow.

PS: Thank you Vijaya Reethika Gottipati for the article suggestion.