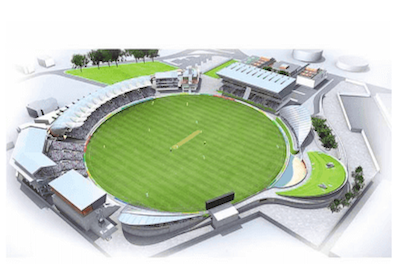 Yours truly recently had the pride, pleasure and privilege of being at the Kensington Oval cricket ground in Bridgetown, Barbados, the land and home of Sir Gary Sobers, Cricketer par excellence. The Kensington Oval has a ‘tapestry’ of more than 120 years of cricketing history and it is rightly bracketed as the Mecca of Caribbean Cricket. It is hoped that readers who are familiar with the trappings of cricket will find this feature tasteful and cultured.

The first Test match was played here in 1930 against England. This was a forerunner to the four Test match series. England was captained by Freddie Calthorpe whereas West Indies had a different Captain for each Test in view of the ‘colonial setting’ then of the West Indies. The West Indies Federation consisting of the islands was formed in 1958. This was a short-lived political union that existed from January 1958 to May 1962. Jamaica broke itself from the Federation and gained independence from United Kingdom on 6 August 1962. Amongst the luminaries of Jamaican  society, Usain Bolt, Bob Marley, Marcus Garvey, Jimmy Cliff and Harry Belafonte come to the fore. Barbados became an independent country on 30th November 1966.

The fourth Test played at the Sabina Park, Kingston, Jamaica resulted in a draw. The outstanding features of the drawn Test were A. Sandham’s gargantuan 325 for England in the first innings and a graceful 223 off the blade of the Black Bradman, his truly, G A Bradley who established his mastery over the bat without an iota of doubt. The West Indians hailed him as they had never done before. The series ended 1-1. The first ODI played at the Kensington Oval was on 23 April 1985 against New Zealand. This was coincidentally the 5th match of the West Indies – New Zealand ODI series then. West Indies scored 265/3 while New Zealand totaled 153/8. D L Haynes scored a breezy 138. The first T20I at the K Oval was played on 20th June 2008 against Australia. West Indies won the toss and chose to field first. The match was curtailed due to inclement weather. Each side was allocated 11 0vers. Australia scored 97/3 (S E Marsh 29; Ronchi 36). West Indies reached the target by scoring 102/3 with 1.4 overs to spare. X M Marshal scored a crisp 36. D J Bravo made himself merry with 28 in 15 deliveries with 3 rip roaring sixes.

The origin of  Kensington Oval is connected to its land that contained grounds for plantation of sugarcane. The pasture area – 4 acres of it – was developed into a cricket playing ground that also had a Clubhouse for the Pickwick Cricket Club. The Oval’s entrance has the majestic statue of Sir Garfield Sobers who is legendary and  known for his dexterity with both the ball and the bat, not forgetting the  walloping of 6 consecutive sixes off Malcolm Nash, the slow left arm orthodox Glamorgan bowler. In order to facilitate the 2007 Cricket World Cup, the Kensington Oval had an expansive renovation scheme carried out. The ground is also associated with the first match of the West Indies Combined Team against a MCC side in the Caribbean in 1911. The problem in the past was water logging of the ground following a downpour of three or four days. Its sandy clay loam could not cope incessant rain. With the laying down of 175 mm amended root zone , 125 mm of unamended rootzone sand, 50 mm of binding layer, 100 mm of gravel layer for drainage and covering it with Bermuda grass that is dense, disease resistant, quick spreading and recovering that encourages close moving, the outfield of  Kensington Oval has acquired an international standing. It currently has the capacity of accommodating 28,000 spectators. Barbados has an area of 15 square miles. The Oval is in the parish of St. Michael and it is in the Southwest corner of the island. Barbados has a population of 290,000 based on the latest United Nations data. Barbados is known as ‘the land of the flying fish’. The flying fish is also one of its national symbols. 92% of its population is predominantly black. 2.7% is white and 1.3% is South Asian. Bridgetown with a population of 110,000 is the commercial hub and capital of Barbados. It is a vibrant city with restaurants serving all types of cuisine. In 2011 Barbados was listed as one of the top 50 countries with the highest human development index. At present one US $ is equivalent to 2 Barbadian dollars. With connections close to Britain, United States and France, Barbados has the potential for a solid economic growth.

In 1914 the Barbados Cricket Association (BCA) bought the Kensington Oval. The structure and status owe its credence to BCA. The redevelopment cost that the Oval incurred in lieu of the 2007 ICC World Cup was to the tune of $ 135 million. The Govt. of Barbados is also a shareholder in the Oval. The restructured Kensington Oval now occupies over 12.5 acres of prime land of which 3.5 acres make up the playing fields including the 6 grass turf pitches in the central square. Stands were added to the Oval. They are named after the sons of the soil of Barbados. The glitterati whose names have been embellished are Sir Frank Worrell, Everton Weekes, Sir Clyde Walcott; Hall and Griffith; George Challenor, Mitchell Hewitt. The ground has been home to non–cricketing events viz. National Football, hockey, inter-school athletics, Miss Barbados pageants and the Barbados Reggae Festival. With technology of the irrigation system harnessed from international football grounds across Europe, there are underground tanks to hold the water. This water is recycled and used for watering the pitches.

It was an experience to savor as our ‘Cricket crazy’ group from Arizona watched the three Caribbean Premier League (CPL or CPL T20) matches of Barbados Tridents from vantage positions in the box of the franchise owners. The CPL began in July 2013. The tournament format was round robin with the knockout coming in the penultimate stages. The Caribbean Twenty 20 from 2010 to 2013 was in its earlier phase. This year Barbados Tridents romped home against Guyana Amazon Warriors. This is the second time Barbados Tridents have won the CPL championship.

To be part of the Caribbean calypso ensconced in the rhythm, gyrations and rhapsody emanating out of Kensington ground hand in hand  with swimming, snorkeling and enjoying the best catch of the day at the Oistins, with our hosts indulgent and magnanimous, it was certainly a soul stirring and an unveiling experience. A Cricket fan should time all these with CPLT20.                               Dr. K.S.Gupta played Cricket for Tanzania, East Africa, as an opening batsman and Wicket-keeper. He was also the official cricket umpire of Tanzania Cricket Association besides being on the panel of Umpires of the then East and Central Africa Cricket Conference ( ECACC ).