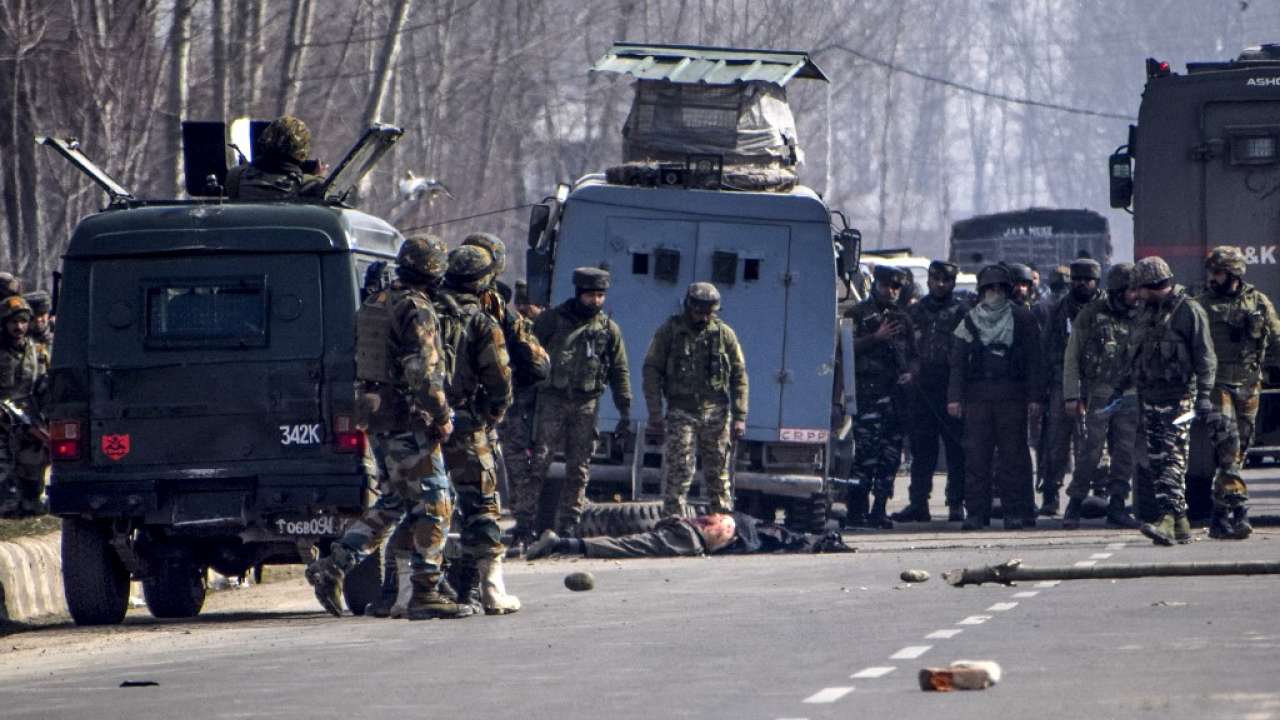 Two terrorists were killed while a CRPF personnel lost his life in a brief shootout at Lawaypora area on the outskirts of Srinagar in Jammu and Kashmir on Wednesday.

A third terrorist was critically injured and is being treated at a hospital.

The brief gunfight broke out after the terrorists fired upon the Naka party in Lawaypora area this afternoon. Three terrorists were travelling on a scooter and were asked to stop by the Naka laid by CRPF at Lawaypora.

"The militants opened fire and in the shootout, a CRPF man got martyred and two militants were killed while a third militant managed to flee in an injured condition but was captured by security forces and taken to hospital where he is being treated," a top police official said.

As three terrorists were travelling together, officials said this indicates that terrorists of different outfits are working together.

Zia Ul Rehman was involved in an incident of looting of weapons from a legislator's house.

Giving details of the operation, Jammu and Kashmir DGP Dilbagh Singh said, "As you all know that there was a Naka Party on the outskirts of Srinagar at Lawaypora. The terrorists were on a two-wheeler, and when stopped by a CRPF constable, they took out a gun out of pheran and shot the constable in the head. Two terrorists were killed in a retaliatory fire while one of them is injured and his treatment is going on. We managed to arrest the terrorist in Srinagar. We have had many operations in the last month."

Adding further, CRPF ADGP Zulfkar Hassan said, "One Scooter carrying three persons was coming towards our Naka led by 73 battalion. They were stopped as they were without helmets. The last person on the scooter got down and took a gun from inside a pheran and shot the CRPF Jawan on the head. Our Jawans managed to retaliate. Two terrorists were killed on the spot and the third terrorist was also injured in the attack and later was shifted to hospital. We lost one soldier. Constable Ramesh Rajan got martyred fighting bravely. I congratulate the party who conducted the operation."

Talking about the identification of terrorists, IGP Kashmir Vijay Kumar said, "Zia is from LeT, Khateeb is from HM and the third One who is injured and being treated is Omar Fayaz from JKIS. All of them were from three different outfits. Zia Ul Rehman was involved in the looting of weapons from an MLC’s house."

Khateeb who hails from Bijbehara in south Kashmir is a cousin of former ISJK chief commander Mugees Ahmad. Mugees, killed in an encounter in 2017, was the one who started ISJK in Kashmir.

Wednesday's operation was led by women officer Santu Devi of 73 battalion of CRPF. She led the successful operation and managed to kill two terrorists and foiling their plans.

Security forces further said that Pakistan is trying hard to send terrorists to Jammu and Kashmir.

Recently, Pakistan-based Jaish sent terrorists to carry out a big attack but they were eliminated by alert forces.

They were highly trained and well equipped. Security forces recovered the modern weapons and other materials from the slain terrorists. They had the latest communication system, had ICom sets and were in touch with their handlers at Pakistan through VPN.

"There are reports that VPN is being misused here. For example, the truck driver (involved in Bann toll plaza encounter on Jan 31) first clicked a photograph of encounter and sent it to Pak as evidence that they have been intercepted. Such use and misuse is happening," Dilbag Singh said.