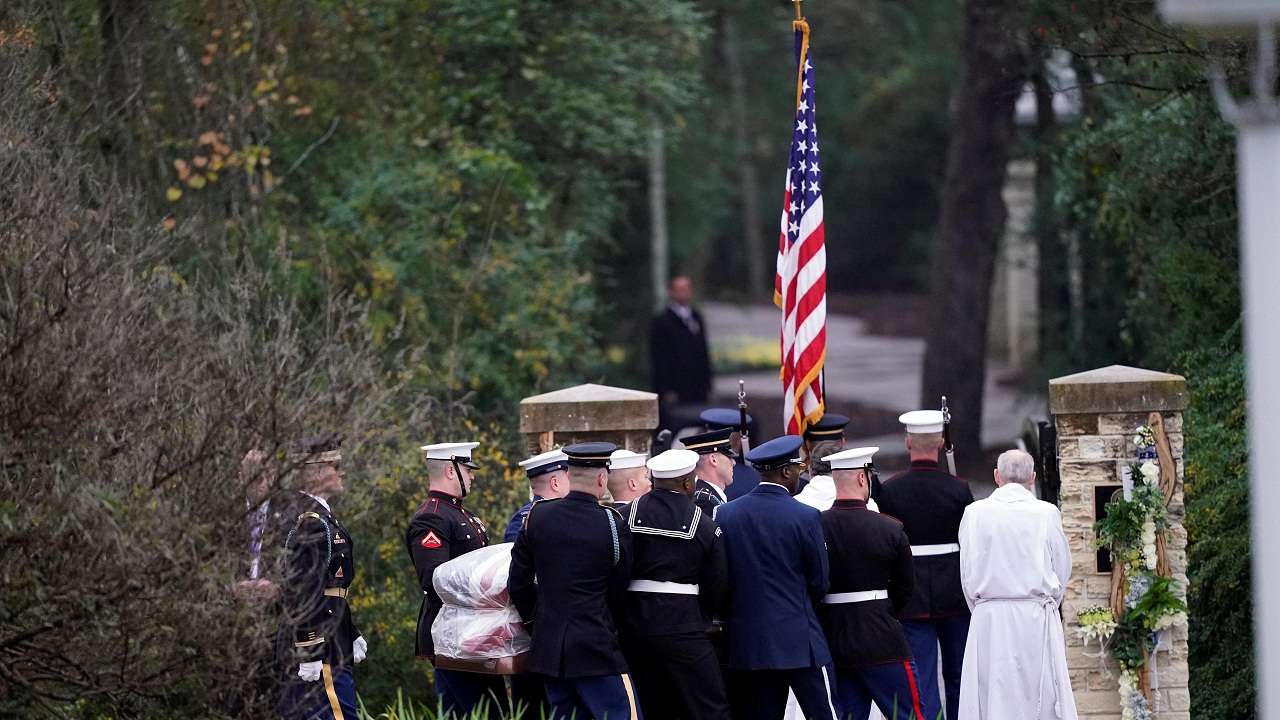 Nov 7 (AZINS) Former US President George HW Bush was laid to rest at his presidential library in College Station, Texas, on Thursday, following funeral services at his longtime church in Houston.

Bush's casket traveled in a special train car about an hour northwest from Houston to College Station and was then carried to the gravesite behind his library by a military honor guard, in a ceremony overseen by his son and former President George W. Bush.

Bush, the 41st US president, died last week in Texas at 94. His remains were flown to Texas on Wednesday following a state funeral at the Washington National Cathedral attended by President Donald Trump, the four living former presidents and foreign leaders.

"The memorial was a beautiful tribute to President Bush's extraordinary life and a noble legacy to public service," Trump said at a Hanukkah reception at the White House on Thursday. "He was a wonderful man. We will always remember this great statesman and beloved American patriot. He really was very special."

Thursday's funeral service in Houston was held at St. Martin's Episcopal Church, where Bush and former first lady Barbara Bush worshipped for more than five decades, and took on a more personal tone with remarks by family members.

George W. Bush, who followed his father to the White House after President Bill Clinton's two terms, sat in a front pew near the flag-draped casket and joined in as some 1,000 mourners sang "America the Beautiful."

George P. Bush, son of former Florida Governor Jeb Bush and one of the former president's 17 grandchildren, remembered fly fishing and sharing ice cream with the man he called "Gampy."

James Baker, a longtime friend who served as Bush's secretary of state, eulogized the former Republican president as a peacemaker and "a truly beautiful human being."

"He was not considered a skilled speaker, but his deeds were quite eloquent and he demonstrated their eloquence by carving them into the hard granite of history," Baker said.

Mourners laughed as Baker recalled how Bush would let him know a conversation was over: "'Baker, if you're so smart, why am I president and you're not?'" His voice cracking at moments, Baker said he was at his friend's deathbed last week.

Raised in an Episcopalian family in Massachusetts, Bush fused his preppy New England background with the more free-wheeling traits of his adoptive state of Texas, where he moved as a young man to work in the oil industry.

That mix was reflected in the music heard at his funeral: the St. Martin's Parish Choir sang "The Battle Hymn of the Republic," country music star Reba McEntire performed "The Lord's Prayer," and the casket was carried out of the church to the thunderous strains of "Onward Christian Soldiers."

Following the funeral service, Bush's remains were taken by train some 80 miles (130 km) northwest to College Station for the burial alongside his wife, Barbara, who died in April, and their daughter Robin, who died of leukemia at age 3 in 1953.

Residents of small towns along the route gathered to wave at the train, a Union Pacific Corp locomotive numbered 4141 and bearing the name "George Bush 41" on the side, as it passed.

Bush, a US Navy aviator who narrowly escaped death when he was shot down by Japanese forces over the Pacific Ocean during World War Two, was honored with a 21-plane flyover in a "missing man" formation before he was carried to his gravesite for a private interment.A light rain that had fallen for much of the day in College Station ended just before the train carrying his body pulled into the station.

Bush was president from 1989 to 1993, navigating the collapse of the Soviet Union and expelling former Iraqi President Saddam Hussein's forces from oil-rich Kuwait.

He supported the passage of the American with Disabilities Act, a major civil rights law protecting disabled people from discrimination.

A patrician figure who served as vice president to Ronald Reagan, Bush lost re-election to a second term in part for failing to connect with ordinary Americans during an economic recession.

He has also been criticized for supporting tough drug laws that led to the disproportionate incarceration of black people, as well as what activists call an insufficient response to the AIDS epidemic.

But tributes in recent days have focused on the former president as a man of integrity and kindness who represented an earlier era of civility in American politics.