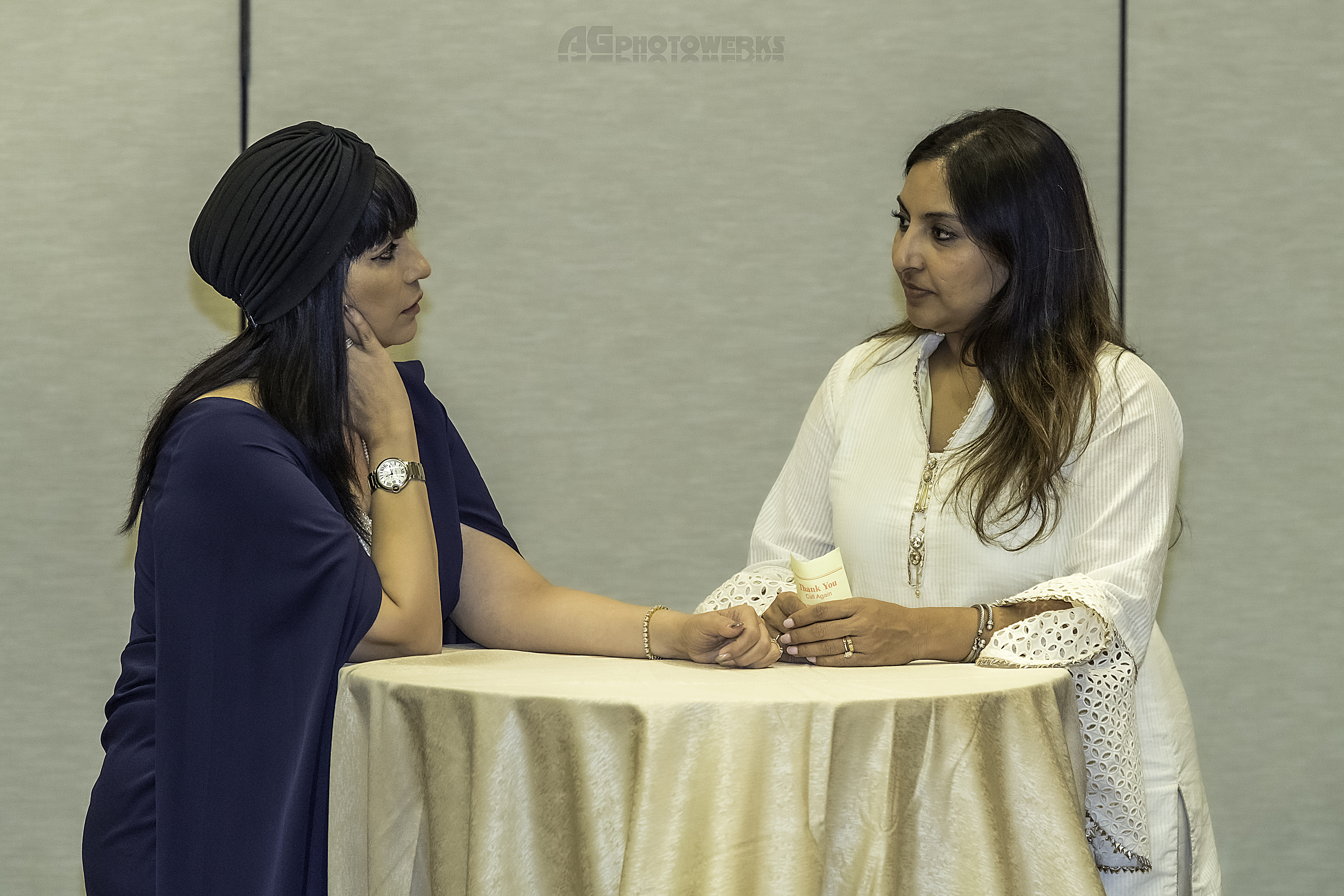 Dressed to the Nines

LIFTor the Luxury India Fashion Touron August 10 last month was extremely well attended despite the day being a busy Saturday in Arizona. Glam Entertainment deserves accolades for hosting such a spectacular Fashion exhibition in the Valley. But all the credit goes to the organizer Neha Mallik’s efforts who succeeded in bringing such high profile designers like Neeta Lulla to Phoenix. Several families met Neeta Lulla, who was the anchor of this Eight designers’ presentation, for special private consultations for upcoming family weddings or other milestone events. Plans are being made to bring designers to Phoenix twice a year so Phoenix families don't have to go elsewhere to shop.

Neha Mallik also had the opportunity to interview this famous Indian fashionista for AZIndiatimes. Here is a clip of the interview which came off the cuff from the bluestocking costumier who wears many hats - from costume designing to fashion styling:

The whole India came to know about you after Devdas where both Madhuri Dixit and Aishwarya Rai wore your costumes. How was your experience working with such a big star cast and of course Sanjay Leela Bhansali?

My career started in 1986 with movieTamacha followed by Sridevi, Madhuri and several others celebrities. Back in the time costume was not spoken about. Media accessibility started with movie - Hum Dil De Chuke Sanam. This is when media started writing about the color combinations and styles,  then came the boom of Social Media and the world got smaller.

You’ve also adorned Srideviand Salma Agha. What do you think about Sridevi as a person? Is it your designer wear that made Sridevi gorgeous or is it she who made your clothes so alluring?

I worked with Sridevi for almost 15 years starting with Chandni, must say that once I started working with her she was an institute in herself, she knew what looked good on her from color, cut and styles to enhance her silhouette. From her I learnt how to structure clothes for an individual. I learnt a lot from her.  She would come up with suggestions and would see that it came out in the best way possible. She challenged me to work the best or create a new look to fit the personality. We both complemented each other real well and understood each others sensibilities to make us both look and do the best.

You’ve been associated with Bollywood for nearly three decades, who do you think is the prettiest actor, without makeup of course?

Which actor has influenced you the most - with her personality and the way she carries herself?

Sridevi herself. For all the reasons that are mentioned above.

As a fashion designer, which actor did you love working for and wish to work again? In short, which actor is God made for your creations?

I would say God has given me the sensibility to create clothes for actors persona. Being able to create and being challenged and the satisfaction that you get by designing for all. Each and everyone has added to the learning experience that I am thankful for.

The much talked about Aishwarya-Abhishek weddingalso had your creative touch. Please tell us about that experience.

I made Ash's Lehenga, light peach with thread work. It was encrusted with rice pearls. especially flown in from Hyderabad. It was an amazing experience where the entire family was involved.  Ash was busy finishing movies before the marriage so I helped with suggestions and picking the right outfits for the occasions. Her wedding saree which had motifs especially woven with Kanchipuram and the blouse was embroidered with zardosi. I also styled her jewelry.

How would you define Mohenjo Darocostumes from the point of view of the period of which the movie was? Was it difficult because you had to use some very basic designs for this prehistoric period film? How did you reinvent the items of clothing for the people of the ‘lost city’?

I came into the movie very late, 15 days before the film was shot. Lots of fabrication was already selected so I had to work with what I had so that no additional cost was incurred. I understood the script and worked with what I had to design the film. It was styled very differently. I closed my eyes and envisioned that era where clothes were draped and not stitched with modern tools.  I shut my eyes to all the research. There were no needles and machines or instruments in the prehistoric time.  This opened the universe for me without stitching but draping the costumes.  Some of the pictures will illustrate that work for me.

You specialize in Paithani designs.Tell us about yourMake In India 2016experience.

I work a lot with Indian weaves, fabrics and designs which are very indian at heart like Kalamkari- Shree HastKala. All made with veg dyes and natural dyes. It was a commissioned government project. Format was using Paithani in a more contemporary form. What I experienced and very often is the newer generation looks at woven fabric, it was all about creating awareness of the intricate material and how to bring it to the younger generation, the precut sarees, long jackets, kurtas, using fabrics differently. I even contemporarize traditional Nauvari sarees-14-15 meters sarees in a very intricate way. You will see my work inManikarnikaand also in new movie, Panipat, due to release later this year. Here we have done some very different Nauvari sarees.

How was The Whistling Wood International Neeta School of Fashion conceptualized?

About 15 years back, director Subhash Ghaiwanted me to start this. We started talking about it for 10 years before the concept. I have been teaching for about 25 years. One day he sat me down and said that you have to start this school.  It was named after me. At the time I was working on Hampstead Online, an online school in Hyderabad for the last 15 years. It was a humbling experience.

Why does ‘Women’ come to mind when we talk about fashion? Why men’s fashion is not that common and is restricted to black suit with an elegant tie? I am talking about everyday life.

I don’t think that's true. Metrosexual men have different forms of looks. You will see them wearing different styles, colors and even shoes. It has become more hip and something that relates to their own fashion sensibilities.

Who do you think wear those extravagant and lavish designer ensembles showcased in prestigious fashion shows like the Lakme India Fashion Week, New York Fashion Week, Milan Fashion Week, Paris Fashion Week, and the likes? They definitely don’t seem like everyday wear. Most of such dresses we watch the characters wearing in fantasy movies.

Here is the thing - the runway fashion is not wearable fashion but you always have a clientele, you have celebrities who likes to wear a certain look that is showcased on the runway.  This is the platform to project the aspiration. Then eventually toned down to be made accessible for everyday wear. Which is calledluxury pretor prêt-à-porter.

Which do you consider the coolest fashion label? For men and for women.

What piece of jewelry you’ll recommend for men? Ear stud is not for every man.

Cufflinks, a tie or a tie pin.

Who in your opinion is the most fashionable personality around the globe today?

The list is very long. You don't restrict yourself to one person. Different styles and colors for different occasions.

A few tips on shoes and bags - both men and women.

Women- Nude, silver and  gold are must. Use less of glitter on your shoes if you're wearing a gown it might get stuck. Comfort and brand but comfort before brand. Bags - any kind that you like and can carry. Certainly have neutral colors, dull gold, silver and black or grey.

Dressed To The Nines